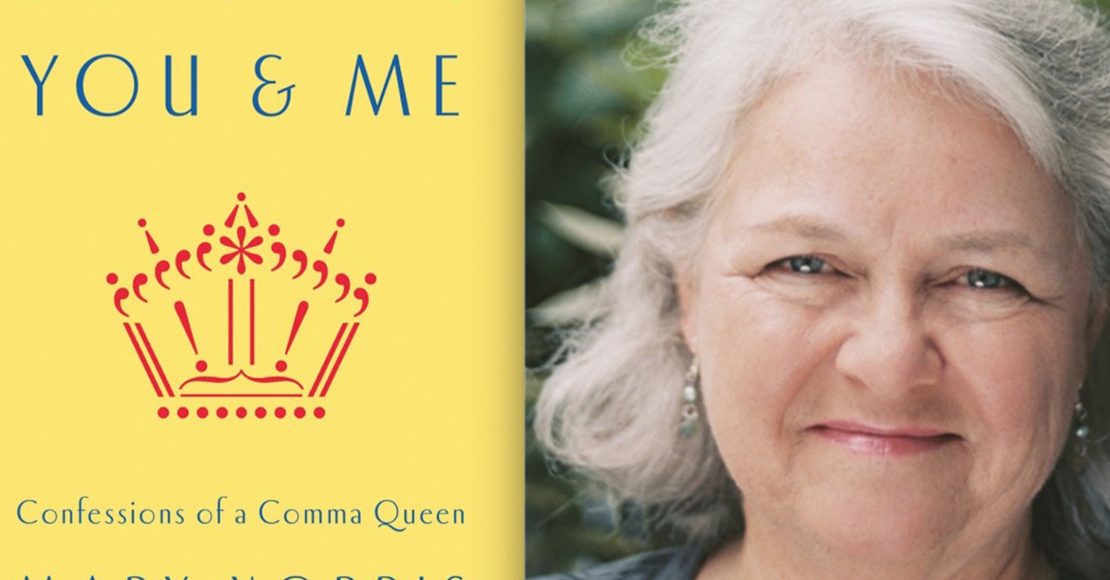 Between You & Me: Confessions of a Comma Queen, by Mary Norris

In her book, “Between You & Me: Confessions of a Comma Queen,” Mary Norris, a long-time copy editor at The New Yorker magazine, has found a way to make reading about grammar interesting and fun.

I know what you’re thinking. How can a book about grammar be fun? Well, it is and especially when she writes about quirky coworkers and famous writers, who argued with her over the use of commas, hyphens, and other grammatical rules. In her book, she tackles big questions, such as when to use a colon or semicolon and devotes entire chapters to spelling, dashes, and other parts of speech that often confound us.

Over the years, I’ve grown to understand most of those rules, committed them to memory, but it’s still frustrating as ever. There are aspects of the English language, especially within our lexicon, that can be mindboggling. Spelling is one of them.

In grade school, I was a horrible speller and hated diagraming sentences. It didn’t help that English is a rat’s nest of contradictions—exceptions to the rules and phonetic madness. Algebra seemed easier or at least more straight forward than learning parts of speech and punctuation.

“The English language is full of words that are just waiting to be misspelled, and the world is full of sticklers, ready to pounce” – Norris

Norris points out that “A misspelling can undermine your authority.” This is absolutely true. There really is no excuse for a misspelled word, especially with autocorrect. Yet, spelling mistakes do happen, and homophones are usually the culprit.

Even for the most attuned with this crazy language, spelling can be elusive because we may be a little too confident. While editing a story, Norris admits to changing terrine to tureen. Both are, in a way, similar, but tureen is much more common. “I had a skeptical streak and an ego,” writes Norris. “and at some level I thought that if I had never seen a particular word it didn’t exist.” Confusing one word for another can happen to the smartest of us.

“Spelling is the clothing of words” – Norris

I thoroughly enjoyed Norris’ telling of historical events that surrounded the orthography of the American dictionary. Samuel Johnson was England’s lexicographer; Noah Webster was America’s. Much of our language today rests upon their efforts centuries ago.

That or Which? Who or Whom?

Many writers fall into the trap of using that for which and which for that. It took years for me to understand their proper usage. Their definitions are fairly clear, but according to Norris, and some of the greatest writers of our time, when to use them is more ambiguous. She devotes an entire chapter to deciphering this conundrum through instructing us on what exactly a restrictive clause is, and what an independent one looks like.

Yes, we should understand the difference and use them properly; however, as Norris points out, there are situations that are not as cut-and-dry as we’d like to think. There is also a movement to use “they” and “their” for a singular-genderless pronoun. My takeaway from these chapters was that we shouldn’t get so down on ourselves if we make a mistake when using pronouns because it’s not as easy as it seems.

To Comma or Not to Comma

The serial comma (aka The Oxford comma). Our teachers made sure we use the serial comma or else suffer those dreaded red marks. The Associated Press style guide says it’s okay to leave it out unless it causes confusion. I want to leave this one open for comments because my opinion can be swayed either way.

Norris explains how some of the most famous American authors, specifically Melville and Faulkner, used commas as pauses of breath. “Charles Dickens is a prime example of a writer who punctuates by ear,” writes Norris. They were comma-philic. Their editing skills wouldn’t jive with today’s standards.

Sure, we’ve all read those jumbled sentences and understand what they say, but try that in an email to your CEO. I think not! You’ll end up in the grammar slammer.

While working in a professional environment, your credibility is on the line with each email that you write. There are grammar sticklers everywhere because proper grammar is the foundation of clear and concise communication.

Sometimes ignorance is bliss because the more you learn about grammar, the more complicated it gets. You start second-guessing yourself. You search the internet for a definitive answer on a tricky question, yet come up with too many opinions. Just remember that it’s a learning process, one that lasts a lifetime. Don’t believe me? Then read Norris’ candid book about how grammar has evolved over the centuries and how it may look years from now. I promise you will learn a few things about our language and reinforce your knowledge on things you already know. Plus there are some laugh-out-loud moments. Norris’ book gives us a personal and informative look at the American language in a very unique way that makes it fun and interesting.