As part of our ongoing campaign to support local non-profits, Pinstripe chose Kart 4 Kids as our beneficiary for 2019. Each year the Kart 4 Kids team hosts a Pro-Am kart race to raise money for Johns Hopkins All Children’s Hospital. More about that later.

After meeting with the Kart 4 Kids team to determine their needs, we embarked on several months of building a public relations campaign that included press releases and distribution to local news and online outlets, pitching morning shows to gain Kart 4 Kids an even broader audience, and video and photography to build a more substantial media library to use for marketing collateral.

Our first campaign was a huge success and the Kart 4 Kids team was thrilled. We were able to place them on interviews with Bay News 9 and Great Day Tampa Bay. Indycar champion and hometown hero, Sebastien Bordais, spoke about Kart 4 Kids and Jenine Rabin from Johns Hopkins All Children’s Hospital Foundation talked about the hospital, the life-saving equipment the fundraiser has purchased, and the impact community has on direct patient care. Patient ambassador, Clifford Mason, was able to attend the Great Day Tampa Bay segment to talk about his experience as a patient of the hospital. All did a great job, see for yourself in the clips below.

Besides providing great PR for Kart 4 Kids, we took this sponsorship to a whole new level. Pinstripe Marketing put together a Pro-Am kart racing team and, though our race team didn’t win, Johns Hopkins All Children’s Hospital did! They received a whopping $185,000 from the Kart 4 Kids efforts, which included sponsored Pro-Am teams, a live auction with items such as a helmet worn by esteemed local IndyCar driver Sebastien Bourdais, a silent, online auction with items that included a race-worn suit signed by Tony Kanaan, driver signed artwork and photos, and many other items. In the last eight years since the first Kart 4 Kids race, the organization has raised a total of nearly $600,000. 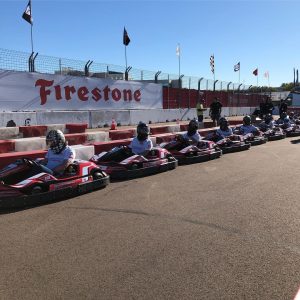 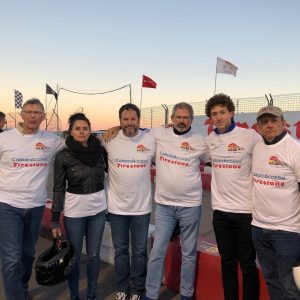 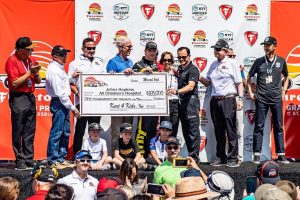 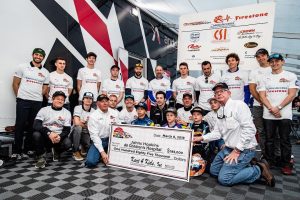 Kart 4 Kids Inc is a 501(c)3 organization established to raise money for Johns Hopkins All Children’s Hospital by organizing the Kart 4 Kids Pro-Am Kart Race. The all-volunteer staff means that All Children’s receives all proceeds net of direct race expenses. Now in its 8th year, the Pro-Am kart race was started in 2012 to honor the memory of IndyCar driver and St. Petersburg resident Dan Wheldon, who had tragically perished in a racing accident. Starting with American Porsche factory driver, Patrick Long as its only professional driver in the first race, the race has been embraced and supported by many of the best racing professionals in IndyCar, IMSA, and Pirelli World Challenge, among other series. Patrick has been joined by early supporter Sebastien Bourdais as the two featured drivers. From its small start, the Kart 4 Kids Pro-Am Hosted by Andersen Racepark, Featuring Sebastian Bourdais and Patrick Long has become one of Johns Hopkins All Children’s top third-party fundraisers by donating $130,000 in 2018. For more information visit www.Kart4kKds.org, ‘like’ its Facebook page at Kart4Kids Pro-Am Kart Race, or follow the race on Twitter @kart4kidsproam.

For many years, Pinstripe has been committed to causes that are close to our hearts. Our own personal and professional growth can be tied directly to the many organizations that provide valuable services for our community. And, because of this, we have gained so much.

Each opportunity with a nonprofit organization places us in a new environment. These organizations are short on resources, so you have to really know how to get the most from people you know, especially within your business network. Getting others involved in a nonprofit shows leadership and drive.

It’s through volunteering that you may get the opportunity to lead others, especially when there are limited opportunities in the office. Volunteering has taught us new leadership skills, such as:

More importantly, the relationships you build while volunteering can last a lifetime. These relationships will expand your personal and professional network, helping you to realize your goals.

For recent graduates, soft skills have become more prized than technical knowledge. Business owners can teach them how to perform their job, but not how to interact well with others. If you have these skills, then practicing them is just as important as developing them. Volunteering is a good way to both learn and continue to practice soft skills.

What are soft skills? They include the following:

Developing these soft skills can have a big impact on your career. For millennials, this type of experience can boost credibility and give them the edge in a tight marketplace. Over time, volunteering teaches how perseverance and tenacity can overcome roadblocks and changes in the economic landscape.

With all of the changes in technology and the way we do business, we need to be able to react swiftly and with confidence. We can vouch for the fact that volunteering helps us face new challenges without fear. Volunteering is as much about personal growth as it is about helping others. It allows us to engage with people in our community, listen to them and try to help. This gives us a deeper understanding of what the community needs and also experience in addressing those needs. Volunteering may start small, but who knows, over time this can change to even bigger roles. That’s up to you and how far you want to take it.

East-West Shrine Game is next week!

We are in full swing with one of our most heartwarming clients, the East-West Shrine Game. This is the longest running college all-star football game in the country, and it benefits Shriners Hospitals for Children. We cherish this client! Tickets are $15 and the game is at Tropicana Field on Saturday, January 20, kickoff time at 3pm. Get your tickets here.

Check out our case study video with some great Shrine Game, practice, and hospital visit footage.

If you know us at all, you know that one of our busiest times of year is “Shrine Game Time,” and it’s starting now! Tickets for the East-West Shrine Game go on sale Friday, December 1, and we have been gearing up for this game for months already.

The Shrine Game is the longest running college all-star football game in the United States, and this is its 93rd year! The game is driven by the desire to support Shriners Hospitals for Children in its mission to help children in need of expert medical care. More than 1 million children have benefited from Shriners Hospitals’ unique way of providing hope and healing, regardless of the families’ ability to pay for services.

Each year, we accompany the players and coaches to the Shriners Hospital Tampa so they can meet some of the patients, play with the kids, dance, sign footballs, play basketball, and in general have a ton of fun. This day shows them why the East-West Shrine Game is “More Than Just a Game.”

Make a Charitable Donation in Lieu of a Gift

During the holidays, we want to give gifts to our clients that resonate with them and show how much we appreciate their business. They spend a lot of money with us, so they should be shown some sort of gratitude. Right?

For some people, they love to shop and know the right gift for their clients. Others think of it as simply checking another box—a way of doing business. Some don’t mind spending a little extra during the holiday, while others are a little more budget conscious.

The differences in attitudes and approaches to gift giving can affect the company’s image. Here’s a good example. There is a whole team of representatives inside a company and they have their own list of clients. When December comes, some representatives like to give expensive gifts, such as concert tickets or food and wine baskets, while others are more frugal with their budgets and give a box of candies and nice card. Both are thoughtful and the right thing to do—for the individual—but not the company.

The problem with inconsistent giving is that one client working with multiple reps in the company might get offended by their actions. It’s an unintentional consequence. There are so many different personalities in a company that getting everyone on the same page when giving gifts may seem like a monumental task.

Be More Thoughtful This Year

One way you can overcome the pitfalls of inconsistency and disparate corporate messaging is to pick one or more charities and give donations in your clients’ name. But, there are some things to be aware of when getting everyone on the “same page.”

Will your clients be receptive to a charitable donation?

There’s a lot of tradition during the holidays, and giving a gift is at the center of it. It almost seems selfish to give a donation, but it really isn’t, especially if you choose a charity that is suited for your client. So, pick a local charity or a national one committed to a cause that fits best. And, in order to avoid looking crass or cheap, don’t indicate the dollar amount in the card to your client.

It’s easy for employees to forget that the physical gift they are purchasing is actually coming from the company. This act of giving represents the company culture and messaging. It’s important that the gifts reflect the company’s mission and vision.

Giving gifts to your clients is a professional way to show that you care about them. It would be horrible to think that they had a negative experience from receiving a gift during the holidays. A great way to avoid this is through charitable giving. Who knows, maybe it will catch on. Now, isn’t that a wonderful thought?