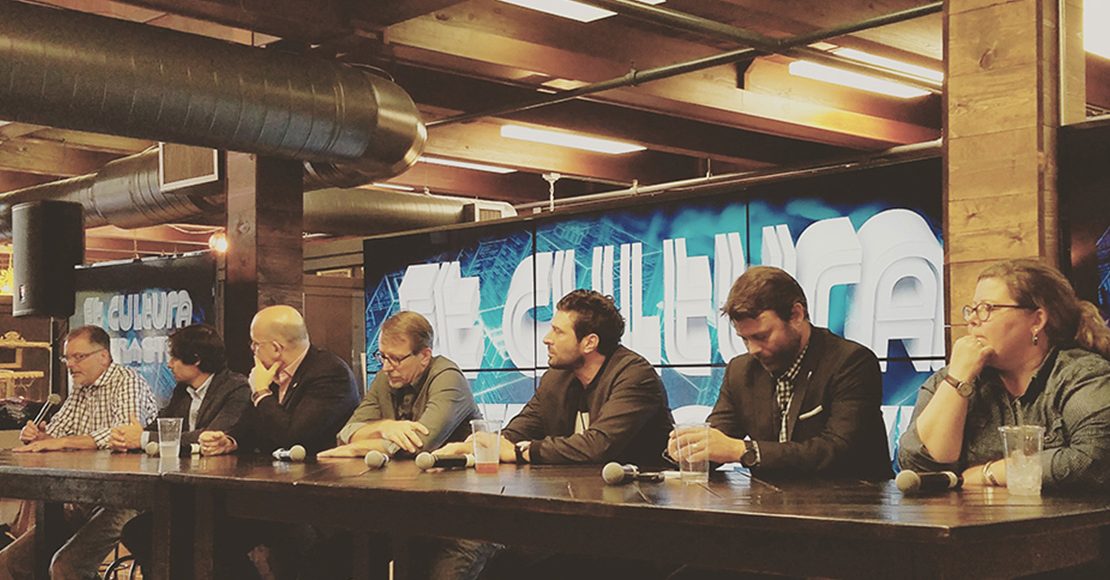 About a month ago the first inaugural Et Cultura Festival took place. The festival was the culmination of four creative minds, a city in the midst of tremendous cultural growth, and a collective of people from a myriad of spaces, from technology to politics to art to education to craft brewing. The timing, it seemed, was perfect. The City of St. Petersburg was ready for this.

Pinstripe Marketing got involved back in June when we met Joel Malizia, one of the founders of Et Cultura. We invited Joel into our office to chat and he captivated us with the promise of Et Cultura – our creative souls could not resist a festival full of art, music, film, and interactive. We decided to sponsor the festival in a big way – by doing pubic relations and media relations in the months leading up to and during the festival. So it began. Wrapped up in the whirlwind, we were in awe as excitement built around the festival. It seemed as if everyone we knew had heard of Et Cultura, either from us or someone else. We were a part of something big in a city we are proud to call home, something that, deep down under, we all knew was coming.

We also saw some great connections and decided to get some of our clients involved. Shorecrest Preparatory School sponsored part of Et Kidtura, a section of the festival just for kids. Our friends at ADM Two, a trade show fabrication and design firm, sponsored many of the beautiful banners and signs for the festival.

We attended as many as the interactive sessions as we could, and were wowed by the local and national presenters that stood before us and discussed their experiences and thoughts on technology in design, entrepreneurship, and even art. The final keynote speaker was South By Southwest’s own Catlin Whitington. After his presentation a panel discussion erupted about how to keep the momentum of Et Cultura going, to make it a signature of St. Pete.

The art and music started on Friday with a graphic design exhibition curated by HYPE Group and held in the beer garden at Green Bench Brewery. DJ Sugarbear was spinning soul music that had us all grooving, and in general it was a great atmosphere. The four Et Cultura founders, Lea Umberger, Joel Malizia, Colin Lyman, and David Allison had their official ribbon cutting ceremony right there by the artwork, and later we all headed down to see local band, The Hip Abduction.

Saturday’s art exhibition, Heroes and Villains, was curated by Black Amethyst Gallery and featured dozens of local artists of many different mediums depicting their own versions of heroes and villains from literature and film. The makers festival took place as well, so there was plenty to see and do. A spectacular projection mapping display was held every hour along with music on two stages and several films being screened. It was an action packed weekend.

We are so glad to have met Joel on that day in June and to have been able to participate on the ground floor of this festival. We worked with our media contacts to connect the founders with the Tampa Bay Times, Daytime Television, and several other local news outlets who showed an interest in Et Cultura. We are certain that this interest will only build as the founders build their list of featured presenters, artists, musicians, and filmmakers. We can’t wait to see what Et Cultura has in store for our city next year!

View some of the articles and news clips from Et Cultura:

Creative Loafing: Photos from Et Cultura over the weekend