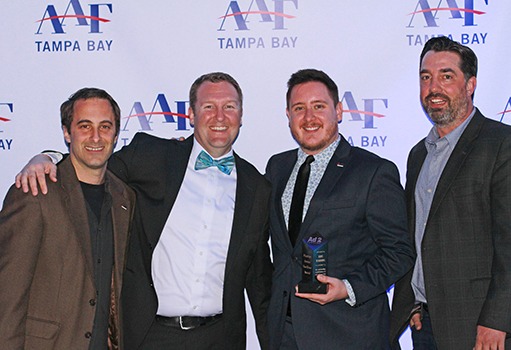 Ad 2 Tampa Bay‘s immediate past president, Kris Solberg, received the 2015 Pinstripe Service Excellence Award at the American Advertising Federation – Tampa Bay Chapter’s ADDY Awards held on February 18 at The Cuban Club. Presented annually by past recipients, the award recognizes the young professional who demonstrates the most outstanding contributions to Ad 2 Tampa Bay, the advertising industry, and the community.

Solberg joined Ad 2 while he was a student at University of South Florida and immediately became involved in the education committee and mentorship program. He later took a leadership role as co-Public Service Director, managing the organization’s pro bono advertising campaign for a local non-profit, which ultimately won the 2011 National Ad 2 Public Service Competition. As president for the 2014-15 year, the chapter earned District and National Club of the Year, the National Ad 2 Public Service Competition, and he was recognized as Ad 2 President of the Year. He currently serves on the National Ad 2 board of directors as Treasurer and is a mentor to Ad 2 Orlando.

“Kris has demonstrated his passion and commitment to Ad 2 in a very short amount of time,” said Ginger Reichl, president of Pinstripe Marketing and former Ad 2 president. “One nomination stated, ‘I can only hope that each year we gain another Kris Solberg for the community.’ I couldn’t agree more. He has been instrumental to the success of the chapter and will play an important role in grooming future leaders.”

Solberg is Account Director at Social Forces in Tampa.

Ad 2 Tampa Bay, Inc., an affiliate of the American Advertising Federation, is a non-profit organization of advertising professionals under the age of 32.  As a eleven-time National Ad 2 Club of the Year, the organization takes pride in providing both members and the community with quality educational programs, national award-winning public service campaigns, professional interaction, member employment services, fun-filled social events and much more. For more information, please visit www.ad2tampabay.org.