Cushman & Wakefield is one of the world’s largest commercial real estate brokerage firms with revenues of more than $6 billion and 48,000 employees in 70 global offices. Pinstripe was recruited to manage media relations for the firm’s Florida offices and the national practice areas based in the state. In addition to announcing available properties and significant transactions, we worked with their incomparable research team and subject matter experts to establish the firm as thought leaders in a variety of industry sectors.

Cushman & Wakefield’s capital markets practice is among the most successful in the country, helping clients buy and sell investment properties including apartment and condominium complexes. While multifamily construction has been outpacing single-family homes, and both domestic and foreign investors are showing more interest in the market, the Pinstripe PR team has had success offering their professionals as sources for capital market stories.

Pricey, posh, tiny apartments rule Tampa Bay’s big-money rental boom in the Tampa Bay Times
“The housing bust “changed a lot of people’s perspective on homeownership. … They’re thinking it’s certainly not the piggy bank it was, and they feel like there’s less incentive to tie one’s self down,” said Byron Moger, a multifamily executive director for commercial real estate brokerage Cushman & Wakefield. “They’re paying a little more, but the lifestyle is better for them and the trade-off is worth it. … It’s as much about lifestyle as economics.”

Luxury condos go from recession doom to boom in the Tampa Bay Times
The few condo developers today cater largely to the upper crust: Bliss, an 18-floor tower proposed for near St. Petersburg’s Beach Drive, will offer nothing below $800,000. Some of the new luxury apartments rising around the bay area might also get converted to condos if prices continue to soar.

“It’s in the back of the minds of developers building high-rise rentals, for sure,” said Byron Moger, executive director of Cushman & Wakefield’s multifamily advisory group. “But the prices have to get to the point where they make sense. And we’re probably not there yet.”

As competition in those gateway markets for real estate has intensified, financiers have turned toward cities like Tampa, where the investment stone has yet to be squeezed dry.

Apartments, condos get a bigger piece of the construction pie in the Tampa Bay Business Journal
Byron Moger, an executive director at Cushman & Wakefield, said most of the new construction is in apartments rather than condominiums. Empty-nesters, young professionals and immigrants are adding to the population of renters in Tampa Bay.

Some of the shift can also be attributed to new conditions in post-recession Florida. “People no longer look at houses as storehouses of value with lots of potential appreciation,” Moger explained. “Plus it’s harder to buy houses — you need more down payment. Sometimes a lack of liquidity makes it easier for people to rent.” 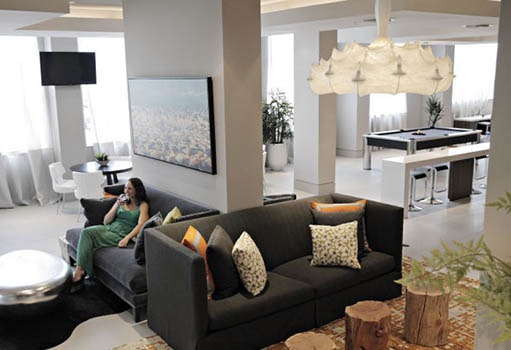 The Cove sells for $50 million at auction in the Tampa Bay Business Journal
“This sale was always meant for auction,” Moger said. “The transparency in the process is very important to the seller. Anyone who’s qualified can bid. It’s live online. Someone might complain afterwards, but it’s right there in front of you. You could’ve hit the button [to raise the bid]. The other advantages are the certainty that it will sell and the high probability that the sale will close.”

Cushman & Wakefield’s Byron Moger is the firm’s expert in student housing projects, so when University of South Florida announced plans for an upscale, mixed-use housing village, he was the perfect person to comment on the project and growing trend in dorm living. 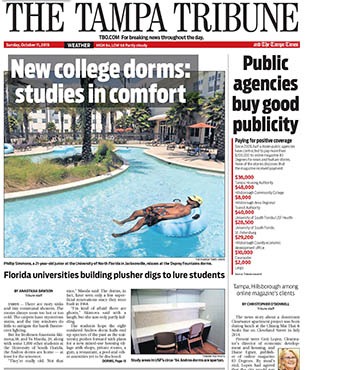 “Clearly universities are competing for students, and they can’t really compete on price,” said Moger. “They can compete based on the quality of services they offer to students.”

The Pinstripe PR team connected him with Anastasia Dawson, a staff writer at the Tampa Tribune (now Tampa Bay Times), to discuss the trends and what we can expect over the next several years as campus life continues to evolve in a Sunday cover story.

Fewer Golfers, but Some Lush Courses are Coming Back 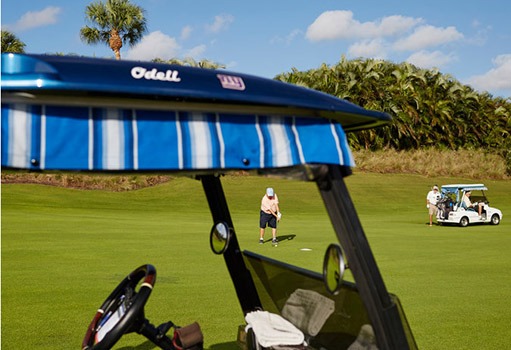 Oliver Hedge, a director in the Valuation and Advisory Group at Cushman & Wakefield, works with golf course and country club investors and developers. He has seen the industry ride the rollercoaster and has an insiders perspective on what is working in today’s climate.

And business is good.

Oliver talked with New York Times reporter Nick Madigan about the state of both public and private clubs and the surprisingly slim margins owners eek out to compete.

Fewer Golfers, but Some Lush Courses are Coming Back

The story made the front page of the New York Times business section – great exposure for our client!

Based on the Times success, we pitched the story to The Real Deal, which featured Oliver in their story, Falling Popularity of Golf Forces a Change of Course. 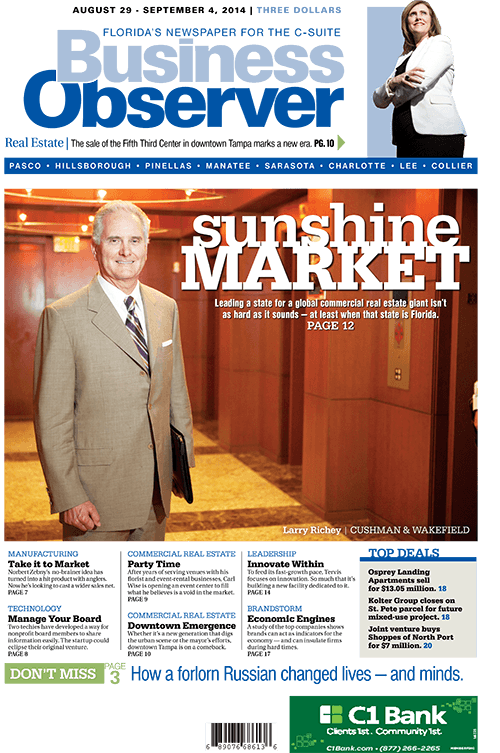 “For nearly a quarter-century, Larry Richey has been steeped in Tampa business and its commercial real estate market as the head of brokerage firm Cushman & Wakefield’s office.

As Cushman & Wakefield has grown — the firm is now among the world’s three largest commercial real estate services providers — so have Richey’s responsibilities and standing.”

Read the story about Larry’s promotion to Florida market leader at the Business Observer.

Drones, or unmanned aerial vehicles (UAVs), are all over the news and the national media is covering stories from military and commercial uses to related privacy concerns. The Pinstripe’s public relations team worked with our commercial real estate client to illustrate how the firm is using the technology to market the properties it has available to lease and sell.

The UAV helps the brokers build marketing materials that go beyond photographs and floorplans. With video fly-throughs of warehouses, distribution centers and large offices, along with aerial footage of parking lots, adjacent buildings, road access and more, the footage gives potential buyers or lessees a better idea of the space before planning a visit.

We were pleased to welcome journalists from ABC Action News, WTSP 10 News, and Tampa Bay Times. 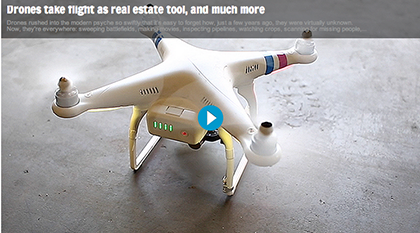 In public relations, we work diligently to build relationships with the media to generate great business stories for our clients. We sit with our clients to learn about their business, their clients, and trends in the industry to find interesting stories to pitch. And once in a while, they’ll mention something in passing that makes us say, “wait a second, tell me more about that!”

That was the case during one of our meetings at Cushman & Wakefield. In between meetings with the brokers, someone mentioned that a couple of the guys in the office were in a band playing at the Tampa Margarita Festival that weekend.

A couple of the other band members worked at different commercial real estate firms.

We know it isn’t about the latest land deal, the sale of a downtown high rise, or a big-time tenant moving to the area with a major lease. It’s a lifestyle feature story to highlight their professionals in an interesting, personal way and to get the Cushman & Wakefield name in front of people who may never read the business section. The majority of our efforts are focused on getting them positive press about real estate, but every once in a while, a story about jamming after hours is icing on the cake.

See more in the Tampa Bay Times about the band! 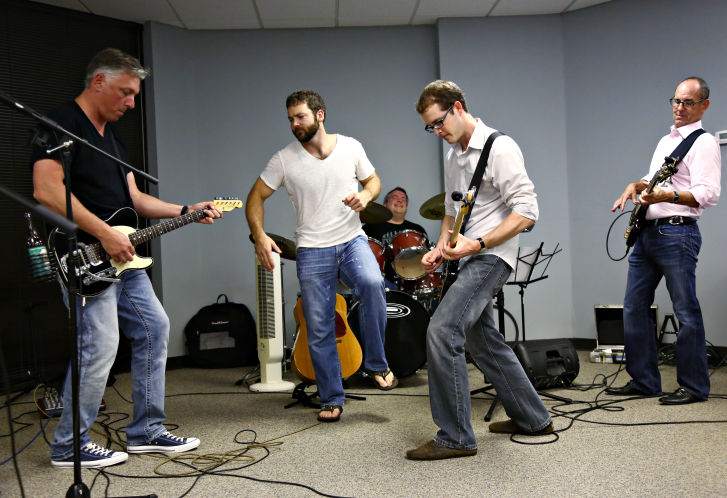 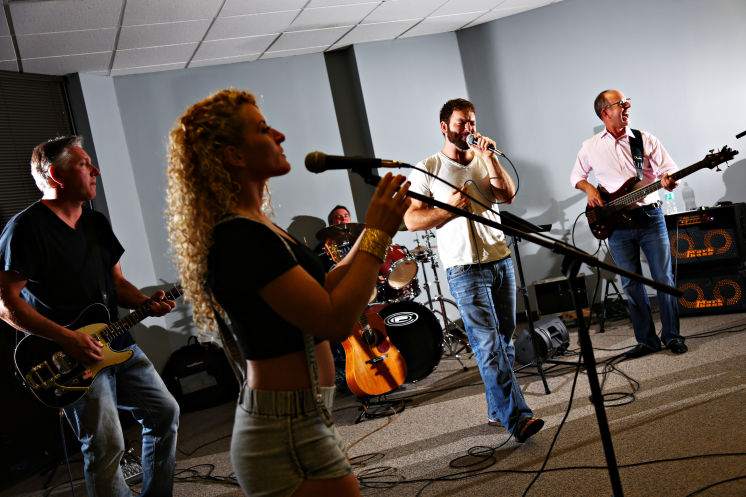 Even our most buttoned-up clients can’t resist World Cup fever. When the US Team played their final game in the first round of groups at noon on a Tuesday, employees across the country came down with cold. But many companies hosted viewing parties to celebrate the team, and the Tampa office of Cushman & Wakefield was no exception. The Pinstripe public relations team invited WFLA News Channel 8 and WTVT Fox 13 Tampa Bay to visit the office and chat with some of the brokers as they cheered the team to … a tie.