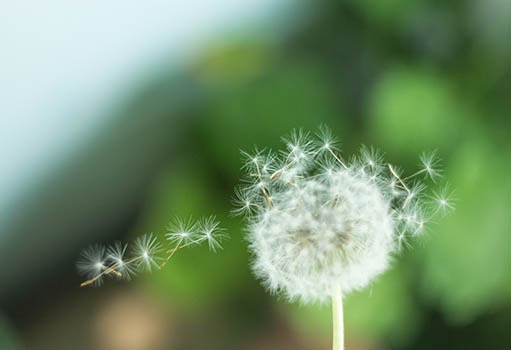 Academia has a strong theory concerning the spread of ideas, concepts, and technology. Yes, math is involved, but thankfully, I am a writer who is averse to math. So, any trepidations you may have had should be quickly dissipating.

Everett Rogers formed his Diffusion of Innovation theory back in 1962. Over fifty years ago, the world learned how most ideas, not all of them, are brought from the drawing table to everyday use. Through the lens of this theory, we have the ability see how the latest and greatest products or ways of doing something spread organically.

The TED Radio Hour* recently devoted an entire hour to “How Things Spread.” I found that after listening to this show, I had more questions than answers, which is a good thing. I like a challenge, and if you do, too, then you might have the same reaction.

Who Should I Target?

So, what’s all this have to do with advertising? Advertising is about getting your products into your customers’ hands, yet it’s the concepts within the products that make them attractive. For example, your phone is about connectivity and entertainment. As a writer for cell phones, I want to convey those ideas. But, who do I reach out to? As an advertiser, I know throwing any message into the wind will just float away. Advertising needs to be targeted and ROI driven. As an advertiser, I need to know the change agents and opinion leaders.

Who are these people—change agents and opinion leaders? Without getting into a lengthy discussion about what constitutes these roles within our society, I’ll use the quick and easy example of pharmaceuticals, one that we should generally know about already. Let’s say drug company P has completed trials of their drug and received FDA approval. Simple enough, they go to market.

Who do they approach first? Doctors, of course. Not just any doctor, but the ones that are in tune with the latest techniques in pharmacotherapy. These doctors are potential change agents, because they are aware of the benefits advanced techniques can offer their patients, as well as their colleagues.

Specialist are attractive targets for the latest and greatest drugs. These specialists incorporate the therapy into their practice, see if it works, then spread the word to other doctors, or speak at conferences. Once a sizeable percentage of doctors are familiar with the therapy, then the drug

company can target the consumer side of the population, having them “Ask your doctor to see if Drug P is right for you.”

Back to the math, briefly, I promise. Diffusion theory shows a bell curve for adoption and uptake of ideas and products. This means that your product has a definite path through its sales lifecycle. Let’s look at the figure** below. 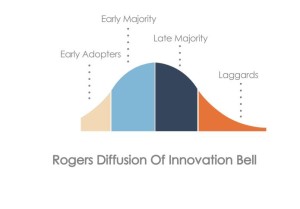 Continuing with our example of new drugs, the specialists are the Early Adopters, who are at the far left of the graph. Of course, this is generalized, but you get the picture. During this early adoption phase, according to Rogers, the effects of the drugs, both good and bad are being disseminated throughout the medical field. The spread to general practitioners also happens during the early adoption phase. The general population appears in the early majority and late majority phases.

What I want you to focus on is the exponential growth during the early adopters and early majority phases. This is important, because if the word isn’t spreading about a product, then the growth isn’t happening. You might as well forget about the laggards. Rogers, in his 2003 edition of Diffusion of Innovation, called laggards in the medical field, conservative doctors that were averse to change and set in their ways. Why would any company want to spend money trying to convince someone that has no want or reason to change? Laggards adopt a product or idea through peer pressure and phasing out of outdated products.

We’ve heard of target marketing for years. Saw it in our text books. Listened to our mentors. There’s a mathematical and scientific reason why it works and produces higher return on your investment. In the future, when you want to create a campaign for your latest service or product, speak with an advertising professional that is well versed in targeted marketing, because it’s science.

*If you’re not familiar with the TED format or TED Radio, I highly suggest listening to the podcast to spark your own creative ideas or learn how to become a better listener to many that are circulating around you.