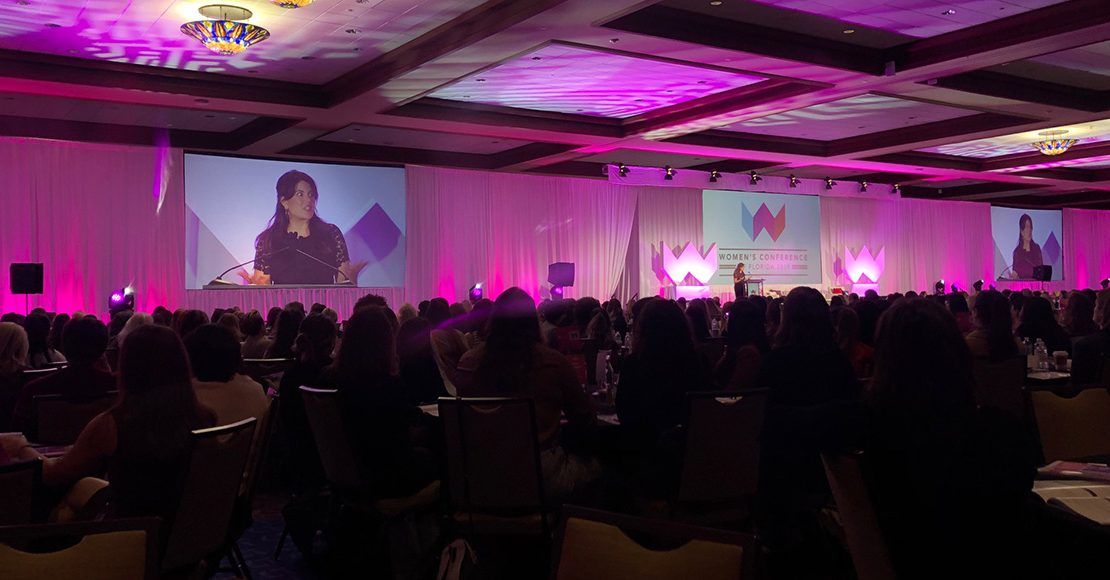 I attended the Women’s Conference of Florida for the second time, and it was just as awesome as that first time two years ago. There’s so much energy, positivity and inspiration surrounding everyone in the room, it’s contagious.

Being general admission and going it alone, while it may sound frightening to some and boring to others, is actually a great way to attend this conference. There are lots of ladies attending solo, and the general admission tables are shared by all of the many solo conference-goers, those independent spirits. I sat at a table towards the back, and throughout the day, between the breakout sessions, lunch, and all the other activities, my table’s attendees rotated, so I was able to meet and chat with even more people of all walks of life.

The first keynote speaker (and for some, the highlight of the day), was Monica Lewinsky. She talked about the traumatic event in 1998 that skyrocketed her into infamy, and how it took years to recover. “I’m the only person over 40 who doesn’t want to be 22 again.” She lightened the mood with jokes like this and facts like, “there are about 125 rap songs that mention my name.”

After telling this heart-wrenching story (it’s so jarring to hear it come from her, the one who lived it, rather than via all the gossip and news and opinions from everyone else), she went on to discuss how words can be just as painful as physical violence. This led to her talking about the very real problem of cyber-bullying, and how it especially inflicts teens.

Lewinsky and advertising agency BBDO recently collaborated on a public service announcement that tells the story of a teenage girl being harassed so badly via texts from classmates that she attempted suicide. Warning, this video contains triggers for victims of cyber-bullying and suicide. 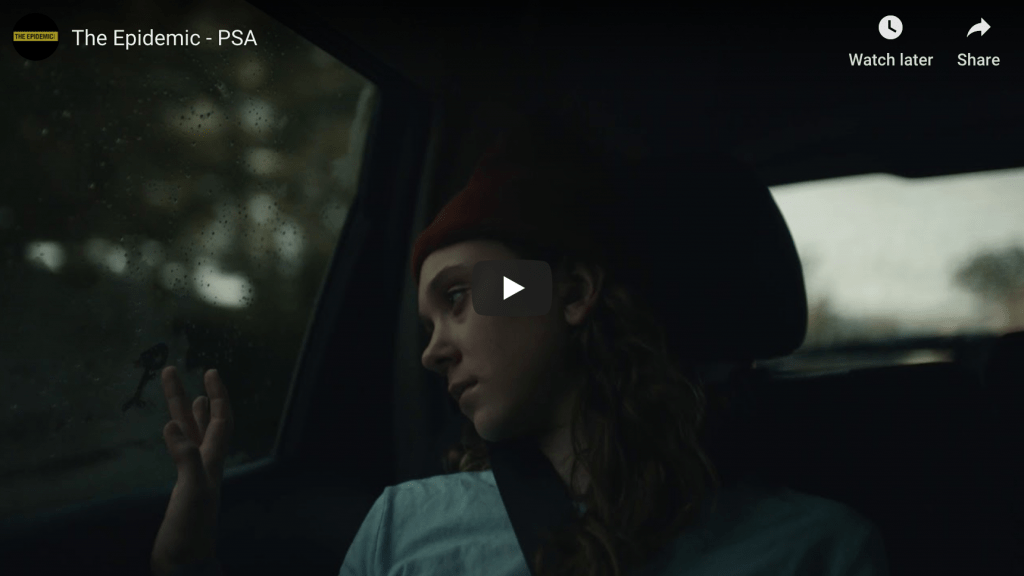 Lewinsky admits her life would have taken an entirely different path if she hadn’t fallen in love with former president Bill Clinton. She talks about how she earned a master’s degree years later, just trying to live a normal life, and when she tried to get a job, found that no one would hire her because of the scandal. She was a pariah, in a sense, and had to find a new direction for her life. Her first step into her passionate advocacy to end cyber-bullying was a presentation to a class of Forbes 30 Under 30 honorees. That speech launched her into a lifelong endeavor to prevent others from experiencing what she had, or at least help them to recover from the trauma of it. I have such a new appreciation for Monica Lewinsky!

My personal favorite was the brilliant and funny Reshma Saujani, founder of Girls Who Code. She talked at length about how we raise our girls to be “socialized to avoid tech and math, and to be perfect.” You know those shirts that say, “Allergic to algebra?” In Saujani’s eyes, these seemingly harmless shirts are part of what is wrong with society. They are the bane of her (and now my) existence, because they promote the idea that girls can’t do math or that it’s not “cool” to be good at math, or some other ridiculous assumption about women and mathematical intelligence. 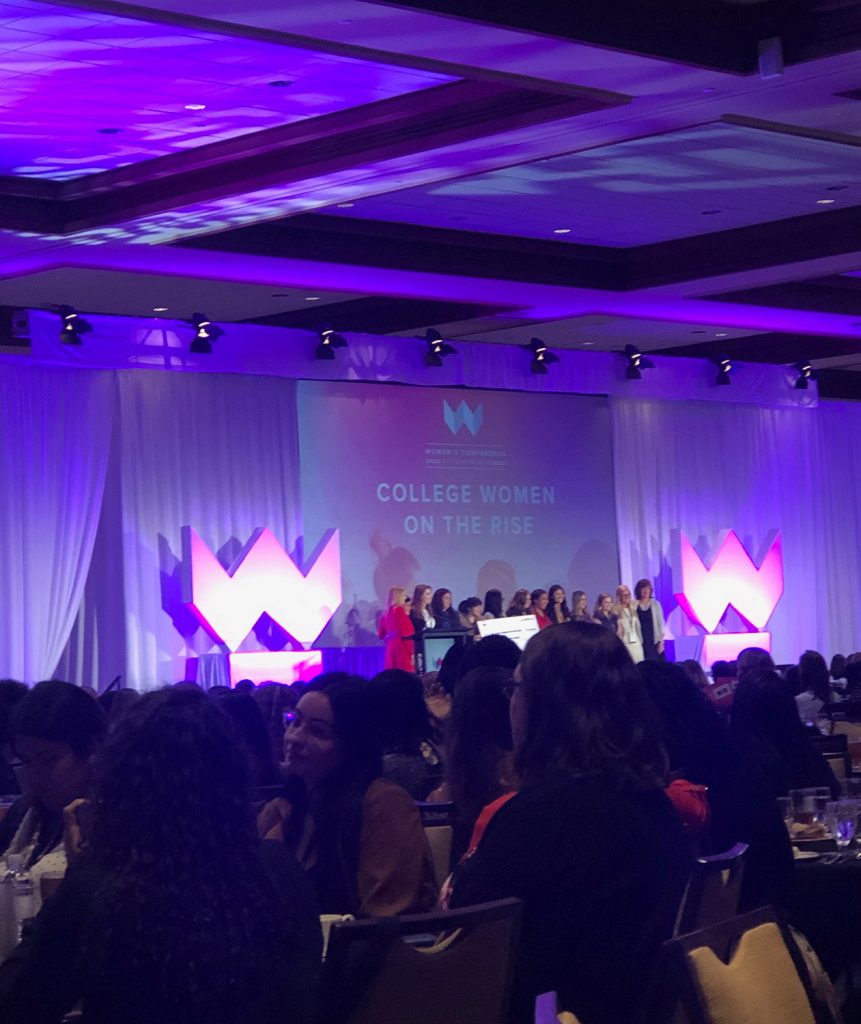 As a science person myself (I majored in engineering during college), and having been raised by a family that encouraged me to be my own person without promoting or implying strict gender rules, I have never understood the “pretty in pink” value system. I played rough sports, came home with black eyes, helped my dad build houses (having installed several hardwood floors and doors, helped frame a house, and painted countless walls and doors by the time I was 18), and took college calculus classes before I graduated high school. Certainly doesn’t sound like society’s image of a “pretty pretty princess,” and it’s how I’m going to raise my daughter too, always leading by example.

To Saujani’s point, “they watch us, follow us, mimic us,” so the best way to teach is to model the behavior. Yes, that girl is going to go fishing, learn how to lay wood floors, build things, while at the same time learning how to cook and sew. “We put our own unrealized potential into the potential of our girls, but we have to stop doing that, and we raise girls to be perfect and thoughtful, and boys to be brave.” Here’s to being and raising a brave girl, Reshma Saujani! We hear you!

One other speaker that I really loved and wanted to mention is author and host of “Terrible, Thanks for Asking” podcast, Nora McInerny. She was just hilarious! Her time slot was toward the end of the day, after lunch, which is a tough place to be (they really pack a lot in one day, so the eyes and brain start to weary after the delicious lunch complete with giant chocolate cake for dessert). Her energy and irreverence were the perfect cocktail to bring the audience back from nodding off.

McInerny’s talk was about grief, loss and suffering, and that benign, casually tossed question, “How are you?” which usually has a much more profound answer than “I’m fine.” Interesting that such a vibrant, bubbly person is a grief expert, but her experience has catapulted her into this realm. She starts her presentation with, “first, I had a miscarriage, then my dad dies, then my husband dies, all within six weeks.” That’s enough to stop anyone in their tracks and leave them crippled with grief, but McInerny used humor, family, friends, and in general, human connection and honesty, to not only overcome her losses, but build an empire of creativity around the topic of grief. She encourages us to offer compassion and support for those around us suffering from loss, but also to reach out when we are in need, for this is how you get through it. Not alone, but with a community. “It’s not my job to protect my children from the cold world, but to teach them how to get through it and be there for others as well.”

The variety of speakers this year, as always, was excellent, and I would be surprised if anyone, men and women alike, walked away without a spark of inspiration for their next project, their next educational endeavor, relationship, or just about any aspect of life. I certainly have a whole host of ideas and goals now!